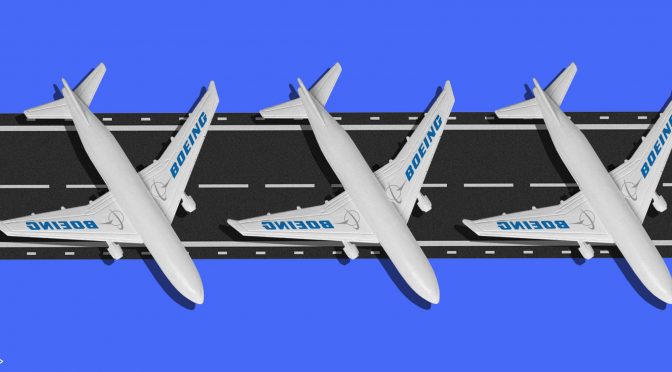 Condolences to the families of those who lost their lives in the air crash a week ago today.

So called “faulty” flight control software is now blamed for that crash and for another crash, also involving Boeing’s 737 Max, five months ago. Boeing has been around for over 100 years and like many large organisations is undergoing “digital transformation”.  They created a digital factory which they refer to as their digital transformation environment (DTE).

Boeing says that a software upgrade is in progress. In the US, the pilot’s union complained that the upgrade was promised five months ago.

5,000 or so new aircraft orders (each valued at over $100m) at risk due to two fatal crashes in a few months. Boeing’s share price dropped 12%, trillions of dollars of orders at risk; but more importantly, hundreds of people dead.

Chinese regulators grounded all 737 Max aircraft. EU aviation authorities, representing 28 EU countries, together with 10 other countries did the same. On 12th March, Boeing and the US regulator (FAA) insisted that they had not found evidence of a problem to justify grounding the aircraft. By 15th March, more countries grounded the 737 Max 8 and both Canadian and US regulators finally joined their ranks. Notably, Norwegian Air wants compensation from Boeing. Meanwhile, no change to Boeing’s stance other than to say that the software upgrade will take time.

Critics may argue that Boeing’s much hyped digital transformation also leaves much to be desired.

NO EVIDENCE OF ABSENCE

Pending the black box investigation outcome, the software upgrade should now be the focus of attention. In this critical case, no stone should be left unturned in the hunt for the problem and a solution.

Despite Boeing’s claim that there is a lack of evidence, they must accept that absence of evidence should not be confused with evidence of absence.

As Boeing’s stock tumbles past its biggest 2 day selloff in 10 years, and they continue to suffer reputation damage, their actions should consider the fact that lives are literally at risk. Of course, the black box may shed more light on the cause of the crash and may even divert attention away from the software. However, based on the current situation, to survive another 100 years, Boeing must now convince regulators that they have isolated the problem, and provide guarantees that it is limited to the flight-control software.

Also, despite the rollout of its DTE, Boeing also needs to step up its digital transformation efforts to enable one of the most basic requirements, rapid rollouts of software upgrades.