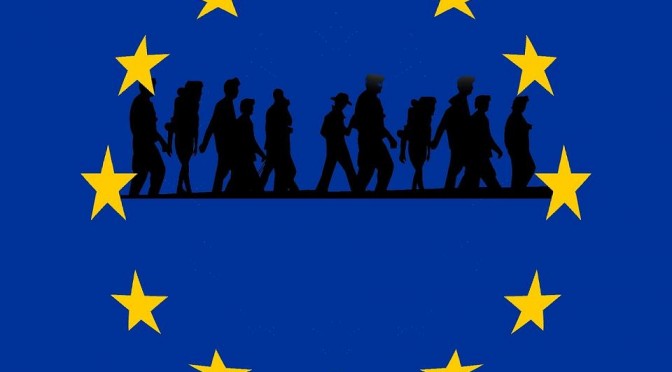 Against the backdrop of global economic turmoil, proxy world wars, and the refugee and border crisis in Europe, the Brexit debate could not be happening at a worse time. Migration, especially from war torn Syria, is a political hot potato, with various EU countries erecting new physical barriers to halt migration, and Turkey offering to manage the flow of migrants from its shores to Europe.  Back in Britain, migration features prominently in the Brexit debate, with mainly negative connotations. Yet, history teaches us that migration has always been beneficial to Britain, creating more economic activity and more jobs, and migration is still vital for the  future growth and prosperity of Britain and British businesses.

The European Union, On Unity

In Germany there is much debate about how to cope with an influx of a million migrants, whilst in Central Europe the debate is about how to resist quotas to share the refugee burden across Europe. Dramatically, Austria and its Balkan neighbours have taken unilateral action to block migrant flows – dealing a potentially mortal blow to the EU’s Schengen agreement – alienating Germany, Greece and EU authorities. Subsequent actions, agreed at the meeting to block migrant flows, have now created a serious humanitarian crisis at Greece’s border with Macedonia. Turkey took in about 3m EU bound migrants – as part of a deal with the EU which it is keen to join – and offered a proposal to limit their onward flow, in exchange for faster EU membership processing. Currently, the only uniting factor across the European Union seems to be a certain focus on stopping further migration.

However, in Britain – despite the fact that it decided not to take part in the EU migrant quota system – there is still serious debate about a possible Brexit in the run-up to a referendum to decide the matter. Also, in common with their EU counterparts, British politicians are making the headlines with their views on migration. In fact, curbing foreign worker migration currently appears to be an important central plank of the Brexit debate. Understandably, given the pressure of migration on public services, this resonates with the electorate; politicians of every hue are exploiting it for political advantage.

On the other hand, given the stiff competition for scarce skilled labour globally, British businesses seem more concerned about how they can actually secure continued access to the skills and expertise that immigrants bring to Britain. And they are right to do so because historically migration has delivered benefits, on balance in favour of British businesses and the British economy; immigrants bring vital skills, expertise, labour and entrepreneurship to private and public sector organisations.

Last year, the German Chancellor, Angela Merkel, invited hundreds of thousands of migrants to Germany and Germans welcomed them. Economically, this makes sense because the majority of new arrivals are young and able-bodied, and the dependency ratio (the proportion of older people in the population relative to able-bodied, tax-generating workers) is rising much quicker in Germany than in the UK. Also, a study by Zew, the Centre for European Economic Research, showed that the 6.6 million people living in Germany with foreign passports paid $4,127 more in taxes and social security on average than they took in social benefits in 2012– generating a surplus of 22 billion euros that year.  Germany clearly understands the value of migration to its economy.

According to The Economist, “reducing the numbers of European immigrants would hurt Britain’s businesses and public services, which rely on French bankers, Bulgarian builders and Italian doctors”. Visit the City of London or indeed any major organisation, company, university or health service centre across Britain and you’ll notice a high percentage of workers from across the world, including general staff, professors, doctors and nurses.

Hazel Blears, former Secretary of State for Communities and Local Government said that, “Time and again new arrivals from Europe, the Commonwealth and further afield have brought skills, knowledge and expertise to these shores, reinvigorating the economy, strengthening public services, and enriching British culture.” A report by her department (Managing the Impacts of Migration: A Cross-Government Approach) stated clearly that migration to the United Kingdom brings substantial benefits to our economy and to society as a whole.

A report by Spatial Strategy and Research, commissioned by Hampshire Local Council, suggests that migration positively impacts on the economy at the National level (CLG, 2008) and suggests that in the longer term migration will benefit all local communities, by encouraging innovation, entrepreneurship and demand for goods and services as well as output and productivity. At the local level, there may be costs of increased migration, but only in the short term as services adapt to cope with increased demand (CLG, 2008).

The Times recently published a letter where almost 200 business leaders call for Britain to vote to stay in the European Union. The signatories include executives at giants such as BP, Credit Suisse, BT, Vodafone, HSBC, Asda, Marks & Spencer, Airbus, AstraZeneca, BAE Systems, and Ryanair.  Irrespective of their motives, businesses across the UK are in no doubts regarding the benefits of migration, and most welcome easier access to the scarce skills of foreign workers in general.

In fact, British firms also lead in the utilisation of offshore skills and labour. The workers they employ, from both within and outside the EU, could determine the competitiveness and economic viability of cities, companies, universities and health centres across the country. In addition, as technology makes it increasingly easier for highly skilled knowledge workers to work remotely from anywhere, British businesses are forced to compete for their skills with firms from across the globe. Large companies started outsourcing decades ago and smaller companies are following in their footsteps; everything from call centre type work to accounting, legal and technology related work can now be performed, for British businesses, by workers in other countries.

Research by Freelancer reports a 35 per cent increase in the number of firms using offshore services in 2015.  Together, skilled migrants and workers located offshore give British businesses access to increasingly scarce skills and labour; these two pools of labour enable the formation and growth of businesses that subsequently create more local jobs, offering work to ever greater numbers of locally based British workers.

The Value of Human Capital

Access to human capital – with the skills and expertise that businesses need, wherever it is located – will be a key determinant of the future economic success and competitiveness of British businesses and of Britain.

As EU countries focus on ways to curb migration and British politicians inadvertently ignore its critical value to the economy or focus the debate on politically charged issues, such as the negative aspects of migration, businesses are busy lobbying behind the scenes; keen to secure access to skills they need to support and grow the British economy, inside or outside the EU.  Skilled migrant workers from Europe and elsewhere, including those located offshore  – are important to the future prosperity of the British economy.  There is a real opportunity for Britain to benefit from migration,  whether it remains inside or outside the EU.