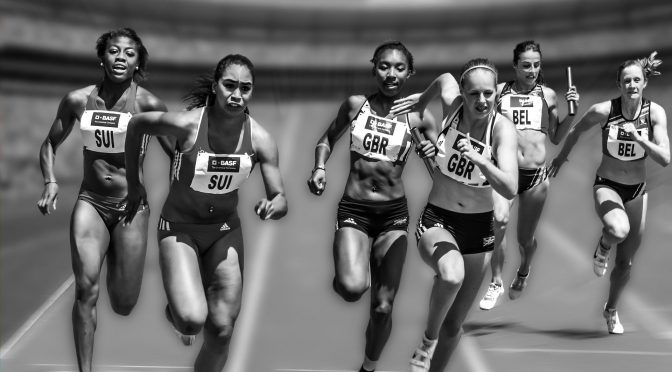 ABOUT PLANS AND RELAY RACES
A project plan shares some characteristics with a relay race.  For example, how long it takes to complete a planned project or relay race will depend on internal and external stressors, and breakage points – operating environment, pace of team members, quality of handovers, etc. – that may individually or collectively affect the duration.  However, unlike relay races – held in highly controlled environments, with well rehearsed teams – project plans are predictably out of date when they start.  Yes, their very first contact with reality renders project plans less useful than otherwise.  Also, unlike relay races, projects do not benefit from practise sessions or dry runs.  That’s just one of the many reasons why we use the Agile Scrum framework to manage our projects.

THE BEST PLANS FAIL, EVEN WITHOUT STRESS
The more runners in a relay race, the greater the number of handovers and potential failure points.  Likewise, more team members, tasks and/or interdependencies in a plan, cause an increase in potential failure points.  Fragile systems or entities are easily broken, compromised, damaged or defeated under stress. Clearly, traditional plans (think Waterfall) are highly fragile.

AIRLINES AND ANTIFRAGILITY
According to Nassim Taleb, antifragile systems are the complete opposite of fragile systems; they get stronger under stress by gaining extra capacity, precisely because they are stressed.  Bone china is fragile but an entity that continuously adapts to deal with failure – for example, the airline industry where disasters systematically increase safety standards – is antifragile.  Rather than just adapt when conditions change, antifragile systems both adapt and evolve. They evolve to respond to disorder or stress by becoming stronger.  When things do not go to plan they adapt and evolve, becoming better able to deal with similar state changes in future.

ARE GREAT SCRUM TEAMS ANTIFRAGILE?
Is a self organising team, that uses the scrum framework, antifragile?  Scrum advocates a retrospective event to make sure that improvements are identified and acted on immediately.  At regular cycles, scrum teams inspect their work and aim to improve – they observe, orient, decide and then act.  In fact, early breakage points enable scrum teams to quickly adapt and evolve, in order to improve and thrive. Failing early – aka early experience of breakage points – may make scrum teams stronger and more likely to deliver better quality products, sooner. Are the best scrum teams really antifragile, the opposite of fragile (waterfall model) teams?